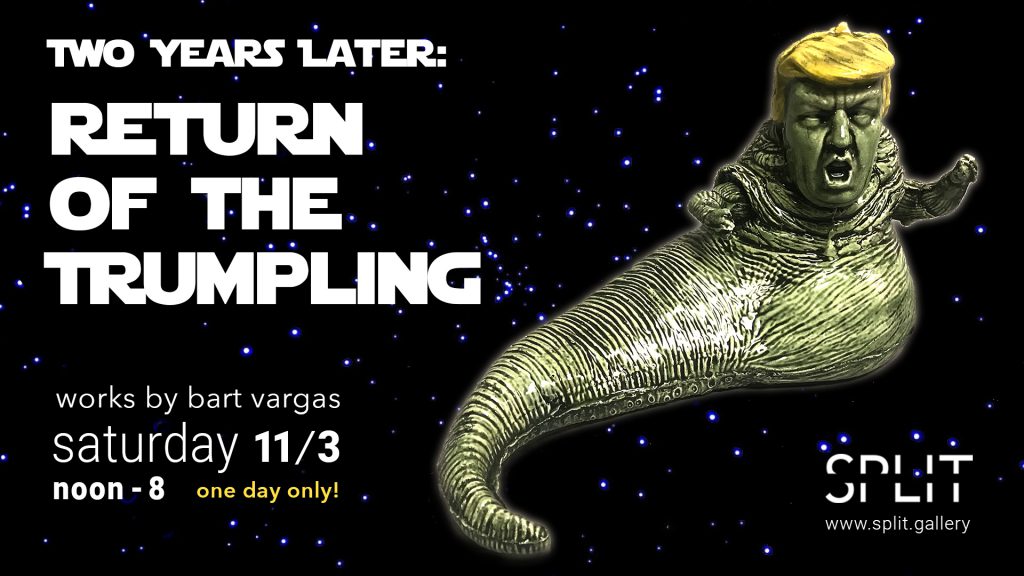 Just like in our government and our nation’s ethics, EVERYTHING IS UP FOR SALE!

An exhibition and studio sale.

For Bart Vargas, waking up on Nov 9th, 2016 felt like living in an episode of Black Mirror. He was stunned to see that the United States had elected an individual and administration that did not represent the pluralistic society that is the United States of America.

Feeling this way, Vargas felt like now more than ever he had to say something about this new era of our collective history. This physically manifested as a TRUMPLING, a three-dimensional ceramic effigy of the President with an infants body. Vargas cast the first Trumpling on Inauguration Day 2017 and committed to the goal of casting one Trumpling a day for the duration of the administration.

Since then, the Trumplings have devolved into many other forms, from various infant bodies, to twitter birds, to other real and imaginary animals, all casting a social and political critique of the President. All of the sculptures are imperfectly one of a kind, many of which have never been exhibited before!

Now after almost two years of work Vargas will exhibit the TRUMPLINGS at SPLIT Gallery in Omaha, Nebraska, and just like the Electoral College, the three branches of government, and our nation’s ethics, EVERYTHING IS UP FOR SALE! In addition to the TRUMPLINGS, Vargas will be selling T-shirts, prints, stickers and swag from previous related exhibitions! Do not miss this one-day event!

– photos from this event will be posted here soon –